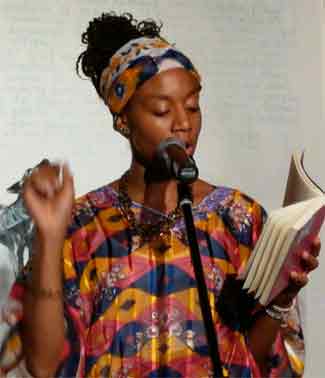 I sit here and contemplate my response to your article. I am a writer of the brand that does not seek to justify a work. If you miss it, then you miss it. If we don’t agree, then we don’t agree. Still, I choose the affirmative for I think my work has been a bit misunderstood.

First a word on the text. On the last evening of the wonderful two week festival Lire et Dire pour le Plaisir in Martinique, I read a short extract from a book I am in the process of writing, entitled Womb Talk©. I shared an extract that was translated by a friend into French from the original English. The book is composed of imaginary letters written between a young teenage girl and the baby she aborts.

The scathing, red, heated review in Madinin-Art is written on what this critic picked up from the first extract I read, two-thirds of the very first letter in the novel. To give a brief description: the short letter follows the thoughts of this teenager (we learn later that she is around the age of 13) just a few days after she has decided to abort. She is feeling terrible about her decision, or “broken” to be more precise. The letter begins with a metaphor of a fruit falling to the Earth. For her, having lost her grandmother shortly before, and a mother who ran away when the girl was an infant, this metaphor is representative of her memories of engaging in sex at such an early age. Thus you have the “fruit falling from virgin limb, being rocked to and fro to and fro to and fro,” a very intimate image of her choosing to engage in sexual activity as a way of dealing with the pain she holds inside. My character describes later in the extract that, as soon as she decided that she didn’t want to “bury her life next to her grandmother’s” by engaging in the activity she was engaging in, she attempts to change, or “come up for air.” And in doing so, she “runs into you,” this “you” being the child she aborted.  In thinking about how her own mother did not want to have her, she feels sick, and broken for having chased away a potential daughter, for having made this decision.

All of this comes from this short extract that my audience received, the extract our critic speaks of in his review. But there are several things that boggle me. One of the few things I understood speaking with this critic afterwards (besides his declaration of its « anti-feminist » nature) was the implausibility of chatting with a nonexistent child. So a gesture towards what for me, as a fiction writer, is quite common in my world: speculative fiction in the likes of some of my favorite authors: Alice Walker (By the Light of My Father’s Smile) and Tananarive Due (Joplin’s Ghost). Second, I was taught in engaging deeply with literary criticism in my studies, that one must draw, when dealing with fiction, a distinction between the author and her characters. I fear our critic has failed to do so. This aside, I wonder if the word “context” means much to some critics? As I attempted to explain to our critic (perhaps in intermediary French, I am not quite fluent yet) this short booklet of letters does continue forward in exploring not only the ways the girl begins to come to terms with the decision she made, but more significantly, in unraveling her inner world as she tries to find her way through a callous environment. In these letters, I explore in what ways my character reacts to her situations, how these reactions change, how she carries pain, regret, and how she learns to let go and move forward with peace in her heart. Most importantly as the writer I am, I am concerned with how my character grows, changes, matures. As is my goal with anything I write for young people, I want them to find spaces of challenge, to pose questions, to uncover meaning.

As I read this extract, a black American accent spurring out French words to a welcoming audience, this critic heard only a political platform on which I shared through the voice of this young girl, an anti-feminist agenda. Still now, thinking of other touching, powerful commentary that I received that evening, I only see irony in his position. Sure, the question of abortion figures heavily into the story (I say question for with the text as a whole, there is no one perspective). This critic’s review skips over even more significant subjects and themes in this unfinished book that are just as heavy, just as heated, such as teenage pregnancy (which in my country is definitely something to reckon with), single mothers, and the vast dark world of depression.

But well, as I am well aware of having already written and published a novel back in 2010, critics like to hone in. So let’s hone in.

The job of the writer is not that of a literary critic. It is a space to challenge, to negotiate, to contemplate things we love, and things we cannot understand. And to follow the progression of change. I’m a historical fiction writer. Of course in a book on the subject of abortion, I will be pulling in historical and social facts. I was boggled by the fact that a critic who may not be interested in the larger context of my story, would feel (in the way I was lectured at) that abortion politics would be absent from my text. And if not absent, then approached strongly with an anti-feminist banner. (Especially given that my character, rather than responding to politics, finds herself instead dissecting emotions that come from her everyday experiences, fighting inside herself the things she believes versus the things she feels, and ultimately exploring her reactions to the situation and why.) I live one foot in the academic world, one foot in the artistic one, so I am very familiar with the movements. Even still, I wanted to thank the critic for sharing the poem. As I topple with any topic that touches on the female spirit, I always come back to the voices that most inspired me in African American literature, the Alice Walker’s, Toni Morrison’s, Sonia Sanchez’s, Nikki Giovanni’s, Zora Neale Hurston’s, Maya Angelou’s of the world. I do not know if these voices are well-known here in the Caribbean, so I will elaborate. The authors’ deal with the same question: how to talk about the women’s place in our worlds. It is Alice Walker’s text on feminism, where she coins the term “womanism” in representation of a black American woman’s place in the feminist movement that resonated with me the most when this idea of writing a text between an aborted child and her teenage mother came to mind. Her idea that sometimes we as women have to take on telling our stories ourselves. Let us take the Texas female politician, a progressive pro-choice powerhouse Wendy Davis. A mother who kept a child at a young age and still fights for women to have a choice. Is it an awakening to my readers to know that there are many pro-choice women who hurt from the decision to get rid of a child? I would not think so. And are we familiar with this movement now in the States? Abortion politics? Planned Parenthood laws? The changes that are happening? Political men in the south where I am from who dare to stand on platforms and to tell women what rights they do and do not have?

I hesitated to respond to this blog, to provide a response here. For I do not, yet, pick up my pen to express political standpoints in these ways. I have my opinions, and in the correct forums I express these in the ways I see fit. But what interests me in this project that I shared is telling a story that resonates with woman who are having to face these changes and deal with the kinds of questions and concerns that my character faces. On a day to day basis. A story that walks through the contradicting feelings of a fictionalized character and to watch her grow, re-discover, re-align her beliefs if necessary, begin to understand the history of abortion, but more importantly the power of her own spirit.  It is a story that echoes from the lives of women I know. It is a tale, neither black or white. It is about listening to the stories of women whose experiences and whose reactions are more diverse than the colorful, beautiful array of people here in Martinique. It is a piece of fiction that, opposite of declaring a political or social position, asks people to go in, and to feel. To get into the head of a young girl that chooses this road at a time period where my country seems to be crumbling with the weight of politicians trying to take us back centuries at a time. It is a project I take on with pride. And a bit of humbleness.

Many critics love scathing language. For me, this time in this article, it rubs off as shallow and uniformed. If I repeat myself in this response, it is only because the passion is there. As a writer, I understand everything I write cannot touch everybody. But as long as there’s one out there, that’s my goal.